The Mary Poston Award was established to recognize the best paper given by a student at meetings of the NC Branch of the ASM. Mary Poston was a longtime employee of Duke University who contributed much to the NC Branch and she was held in high esteem both by her colleagues and by medical students. She contributed much to the NC Branch, including service as Branch Secretary-Treasurer from 1950 until her death in 1961. Many letters of appreciation have been written over the years by student recipients of the Mary Poston Award, commenting on the confidence the award gave them and on the importance of the competition for the award as part of their graduate training.

The Thoyd Melton Award was established to recognize an outstanding oral presentation by a graduate student. At the time of his premature death on Nov. 22, 2000, Thoyd Melton was Associate Vice Chancellor for Academic Affairs and Dean of graduate studies at N.C. A&T State University. Prior to this position, Dr. Melton was a member of NC State University's Department of Microbiology and an Associate Dean of the Graduate School. Dr. Melton was very active in research and particularly in graduate education. In 1999, he received the William A. Hinton Research Training Award from ASM. This award honors an individual who has made significant contributions toward fostering the research training of underrepresented minorities in microbiology.

Those of us who knew Thoyd have no trouble remembering him. Thoyd loved scientific problems and was renowned for his questioning of seminar speakers. His questions, while never barbed, were incisive and driven by a conviction that outstanding problems and inconsistencies in the project being described could be solved--right then and there. He could also deduce (and want to discuss) exciting implications of a project. With Thoyd in the audience, a student presenter would always come away with some new ideas.

It is in this spirit that the NC ASM branch offers the Thoyd Melton Award for an outstanding graduate student presentation. 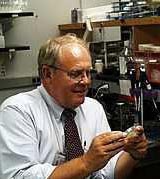 
This award, first given in 2007, is awarded for the best presentation (posters or talks) by an undergraduate student at NC ASM Branch meetings. The award is named in honor of Dr. Paul Phibbs who was an early advocate of undergraduate student research presentations and posters at the annual Branch meetings. He was actively engaged in graduate education and research training at Virginia Commonwealth University, Medical College of Virginia (1970-85), and at East Carolina University, Brody School of Medicine (1986-2007), where he was Professor and Chair of Microbiology & Immunology. Dr. Phibbs was continuously involved with the ASM in numerous academic and leadership roles throughout his career. Since retiring to the Asheville area in 2007, he continues to be a strong advocate of undergraduate research mentoring and of student membership and participation in the ASM.


Jim Brown Award
This award, first given in 2020, is awarded for the best poster presentations  at NC ASM Branch meetings.
Past Brown Winners